last august, right in the middle of a really weird year, something really weird happened in the midwest of the united states, specifically in my home state of iowa.  for some reason, despite all the different forms of media we have available for talking about odd occurrences, iowa’s derecho as it was called, was not discussed very much.

thankfully an old friend of mine,  james grob aka the iowa scribe wrote a column about the derecho that described the moment with much more humanity than typical news articles can provide. the headline of the article echoes (implies) the lack of attention this natural phenomenon received:

A VOICE CALLS OUT FROM THE DEVASTATED IOWA WILDERNESS

wilderness refers to how destructive the derecho was in iowa. wilderness is the noun equivalent of the adjective wild. call out means trying to get attention. listen how scatman john is calling out from scatman’s world in the chorus of this hit from the 90s…

the derecho came as a surprise to iowans, james included…

honestly, i’d never heard of it before. it sounds like it might be something delicious u could order at a mexican restaurant. it’s not that.

i’d never heard of it is past perfect. present and past perfect are used with the verb hear (NOT listen) to show recognition of a name or fact. might means maybe.

pooh could have said “i’ve never heard of this”  but this is funnier.

as james started to receive messages from friends and family, the peculiarity and urgency of the situation became clear…

an alarm went off in my head. something is amiss…something really bad must’ve happened.

the phrasal verb go off means activate. amiss means wrong. must’ve happened is third conditional—must in the past indicates it was not completely clear what happened, but the highest probability is that it was something really bad.

james started to worry a little…

i checked on my sister in the quad cities. she was alive and unharmed, and so were my nephews. some damage. a tree was down in her yard, and her area was without power. little did she know they would be without power for five entire days.

unharmed means safe. nephews are the male children of your brothers or sisters. the female equivalent of nephew is niece. little did she know means she had no idea/ it would be a surprise. the title of this pop song about doubts and secret feelings in a relationship uses the same phrase…

the quad cities, located on the mississippi river, consist of bettendorf and davenport iowa and moline and rock island, illinois. 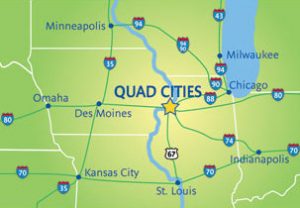 the messages were frightening. the photos i saw were chilling. faces torn off buildings. cars flipped on their backs. entire fields of corn flattened. trees down, piled 30 feet high… “i can’t believe we’re still alive.” nearly everyone i contacted counted that blessing at the end of their extensive damage report.

chilling as an adjective means disturbing. tear off means violently remove. flipped on their backs means wheels in the air. flatten means knock down. piled means on top of each other. nearly means almost. count blessings means focus on the positive. blessing alone means a gift from god.

frightening means scary. it is an important part of the chorus of the song kung fu fighting…

everybody is kung fu fighting,
your mind becomes fast as lightning
although the future is a little bit frightening
it’s the book of your life that you’re writing

many of the messages james shares in his article came from a friend/cedar rapids resident who was caught in the storm.

cr just been devastated by worst storm i’ve ever been in...much of city looks like combat zone. [my son] and i were in truck and barely made it to safety. got on road and within 200 yards it was blowing so hard i could hardly see and drive. huge limbs and trees were falling into the road and debris was flying everywhere… if i hadn’t known the way, we couldn’t have seen well enough to continue…counted 14 semis down leaving cr.

limbs and other tree debris after the derecho (b100quadcities.com)

the truck in the photo below is called a semi NOT a trailer, which is what it is known as in spanish. the white part in the back is a trailer. the yellow part in front is the cab.

a semi: several were flipped over by the derecho in cedar rapids

hardly and barely both mean almost not. barely is used in the spoken word section of van halen‘s panama. listen at 2:45 for

yeah, we’re runnin’ a little bit hot tonight
i can barely see the road from the heat comin’ off

as james reports, iowans have the character to persevere in the face of the damage done by the derecho…

we’re iowans. we’re tough. we’re kind. iowans are resilient. we look out for each other.

but it was necessary to call out of the wilderness to get a response from  politicians in washington d.c. it took several days to get any type of response from national leaders. nearly a week after the derecho, president trump visited iowa, which the article classifies as better late than never (late is better than not doing it at all).

[in the second half of 2019] there were more than two dozen political candidates running all over our state, telling us how much they loved us, asking us to caucus for them. until sunday, i hadn’t heard a peep from any of them regarding our inland hurricane.

caucus is the process that iowa uses to select candidates for the presidency. regarding means about. hadn’t heard is past perfect and refers to the time between the derecho and the sunday after the derecho. peep is a quiet little sound. it was also the name of a popular emo rapper…

the english practice extra for this post has definitions for go by, shouldn’t, goddammit, grow up, face facts, put on big boy pants, midwest, hesitate, reluctant, as in, blow down and three translations for derecho in english.

do u have any questions about the vocabulary used in the iowa scribe column, this post or the english practice extra video? post them under leave a reply

richyrocks has over two decades of english coaching experience. his philosophy is a strong focus on vocabulary expansion and authentic, fun material.

translate richyrocks.com to your language